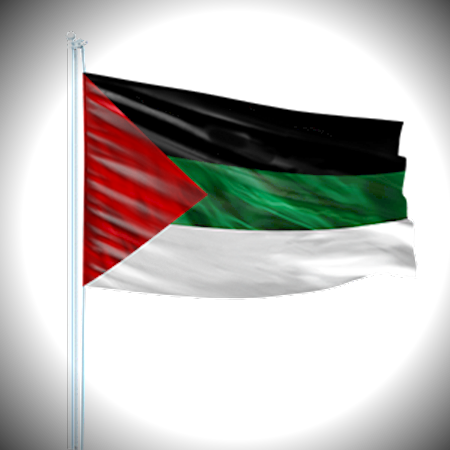 A major military show was held during the ceremony, with the banner carried on a gun carriage before being presented to Prince Faisal, who took an oath to keep it raised high and the army repeated the oath after him.

The banner was then passed on to all the Arab Army’s units in Hijaz and Jordan. In a letter to the British high commissioner in Cairo, Sharif Hussein informed the Allies of the description of the new banner, requesting that ships and military units carrying it be left unharmed.

Al Qibla, in its 82nd issue, published a statement detailing the description of the Great Arab Revolt banner.

The concept of the Revolt’s banner came from the symbols of the Arab Awakening, and there was no foreign interference in its creation. The Great Arab Revolt forces originally carried the red Hashemite flag, which had been the banner of the Hashemites since the time of Sharif Abu Nami, who was a contemporary of Ottoman Sultan Selim I in 1517 until 1916.

The design of the Revolt banner emanated from a need to design a flag that represents Arab history and civilisation, which is an Arab Hashemite endeavour and is in line with the goals of the uprising. Thus, the first design was made up of four rectangles — white, black, green and red — after which it was modified to make the red Hashemite colour a triangle connected to the three other colours: black to represent the flag of the Abbasid state, green for the Fatimid state and white for the Umayyad state. As such, the banner represents the deep-rooted civilisations of the Arab and Muslim nation, of which the Great Arab Revolt is an extension.

The Great Arab Revolt hoisted this new banner; and forces entered Aqaba on 6 July 1917 carrying it. The Revolt’s leadership was then moved to Aqaba to continue its operations and victories until forces entered Damascus to establish the independent Arab state, led by King Faisal I on 2 October, 1918.

Due to its historical significance and its symbolism, the banner has been incorporated in the design of various flags around the Arab world. It became the Syrian Kingdom’s flag in 1918, with the addition of the seven-pointed star on the day the Kingdom declared independence, led by Faisal bin Al Hussein, on 8 March 1920.

When Prince Abdullah I arrived in Amman in 1921, he adopted the same banner as a flag for the government of Transjordan. In 1922, the order of colours was changed, to make the white in the centre so that it can be seen from afar.

The Palestinian National Liberation Movement has also taken on the Revolt banner as its flag, and it remains so, with the white colour in the middle.

Jordan explained the seven-pointed star as a symbol of the first sura of the Quran “Al Fatiha”, referred to as the “seven oft-repeated verses”, entailing the belief in monotheism; humility; social justice; a call for following the righteous path; achieving aspirations, goals and human dignity; and the sense of nationalism.

The banner whose original pattern is in Jordan’s possession is one of two flags that have remained from the days of the Great Arab Revolt. The second one is at the Imperial War Museum in London.

Sharif Hussein bin Ali, leader of the Great Arab Revolt, designed this banner, of which very few flags were made in that period.

Jordan had previously retrieved this banner — which was on display at Sotheby’s in London, specialised in items with a rich heritage — under Royal directives.

Calling: ‘God bless the apple of my eye that has protected the banner of the ancestors. It is the mother flag, bestowing a birth certificate unto every free spirit’

My lord, the master of men, Army Day is the finest day

This ‘gift’ shall remain planted in the hearts of knights

So call forth, ye where the ‘father of revolutionaries’ will call for prayer on judgement day

Your army is coming, and ‘the Rock’ bears witness to the dedication of these hearts

It is coming, so tell your gates to meet up at Bab Al Wad

Prince Faisal bin Al Hussein was born in Mecca on 20 May 1883, where he received his elementary education, before continuing his studies in Istanbul and then returning to Hijaz with his father and siblings in 1908. In the following year, he was elected as a deputy for Jeddah in the Ottoman Chamber of Deputies.More...

Jafar Al Askari served as prime minister of Iraq three times, and was then named Iraq’s ambassador in London, where he studied law. He was assassinated in 1936.More...

Born in Taif in 1881, Sharif Sharaf bin Rajeh fought in the Aseer campaign before World War I. He then succeeded his father as Taif emir in 1915.More...